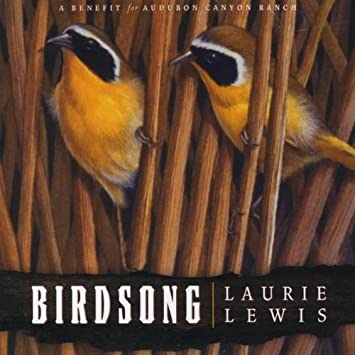 A compilation of eleven songs that have in common abundant bird imagery. Some of them are taken from previously released CD’s, and I thank Rounder, Sugar Hill, Dog Boy record companies, and all the writers and publishers, for letting me use these cuts on a royalty-free basis for this worthy fund-raiser. The beautiful artwork on the cover was painted by Debby Cotter Kaspari, former banjo-player with the SF bay area’s All Girl Boys. In addition to the previously-released material, I recorded two more songs especially for this CD.

Audubon Canyon Ranch (ACR) is a non-profit organization that owns and operates three nature preserves in Marin and Sonoma Counties, California: The Bolinas Lagoon Preserve in Stinson Beach, the Bouverie Preserve in Valley of the Moon and Cypress Grove Preserve in Marshall.

Each year more than 22,000 people visit the Bolinas Lagoon Preserve during its open season from March to July. Resource management research and environmental education programs are conducted throughout the year. Last year, more than 3,000 school children learned about the preservation of the immediate area’s habitats and the biology of its flora and fauna. The Bolinas Lagoon Preserve is currently looking for volunteers who would like to be trained to lead these programs. – Laurie

All profits go to Audubon Canyon Ranch. For more information visit their web site or call ACR at 415/868-9244.

A good record for a good cause, “Birdsong” is exactly what its title says: songs about birds. The proceeds go to Audubon Canyon Ranch, a series of wildlife sanctuaries and environmental-education projects along the northern California coast. All but two of the selections are resurrected from previous Laurie Lewis CDs. They document her austere country-folk approach, with the occasional (though here nearly nonexistent) excursion into straightforward bluegrass. They also prove – though it is hardly news to those who have heard her music before – that Lewis’s taste in songs is damn close to perfect.

The hardy traditionals – the ones you might expect to hear – such as “The Coocoo,” “Free a Little Bird as I Can Be,” “Lonesome Dove,” and “The Same Old Tale the Crow Told Me” — aren’t here, but folk songs in the old-fashioned sense aren’t entirely missing in action. There is a lovely art-song reading of the Appalachian lament “The Blackest Crow,” set inside Darol Anger’s tasteful string arrangement, as well as the sprightly Irish “Singing Bird.” Otherwise, Lewis turns to gifted tradition-inflected writers Carol McComb (“Bird in the Wood” and “Little Birds”), Mark Simos (“When the Night Bird Sings” and “Let the Bird Go Free”), Gillian Welch and David Rawlings (the haunting “Acony Bell,” from Welch’s first CD), and others, including a couple of Lewis’s originals that stand tall even in this elevated company.

The concept could be merely gimmicky, but it isn’t. The simple truth, one gathers, is that birds inspire fine songs with memorable melodies. Yet one more reason to keep them around, surely. In any event, performing, writing, and singing have to work hard to get as good as Lewis’s “Haven of Mercy”:

The hawk hangs above me, the raven glides below
The quail has found a hiding place
In the woods, so dark and low
And I’m like a tiny sparrow who’s found a place to rest
At the very gates of heaven, my haven of rest.