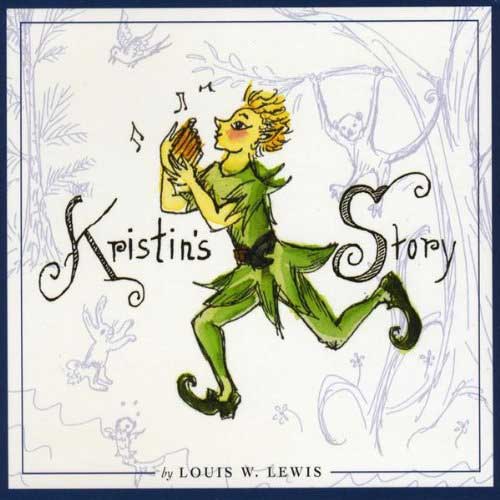 I’m pleased to announce the release of “Kristin’s Story” on CD.

This charming and imaginative tale for young listeners was written by my dad, Louis W. Lewis, for my older sister when she was little. That’s been some time ago now, but the music and story have stuck with me all these years. I finally decided that we just had to record it. My dad, an accomplished flutist who played for a little while with the Dallas Symphony, wrote not only the narrative but the flute music as well. We enlisted the help of Matt Eakle (of the David Grisman Quintet) to play flute and Heather Rowntree to read the story. Artwork was supplied by (my best friend since fourth grade) Dana Everts Boehm.
– Laurie

Louis W. Lewis says:
“‘Kristin’s Story’ is a retelling, for children, of the story from ancient Greek mythology of the Great God Pan. Pan was the spirit of Nature—the spirit of all living things.

The Great God Pan invented the Panpipes, which was a bundle of hollow reeds of different lengths, on which he could play music. (If a reed, or any hollow tube, is closed at one end, and you blow across the open end, you can produce a musical tone. Each tube plays one note, depending upon its length. Blowing across the end of a pop-bottle would have the same effect).

Our little elf made his instrument the same way Pan did— from a bundle of reeds of different lengths. His reeds, or pipes, have a different sound than the sound of the silver flute that plays the rest of the music. Can you hear this different sound?

This story was written for Kristin when she was two years old. When she grew up, she also became a flute player! It’s fun to play a musical instrument.”

It is recommended for children 7 years and under. I, of course, recommend it for everyone.
-Laurie