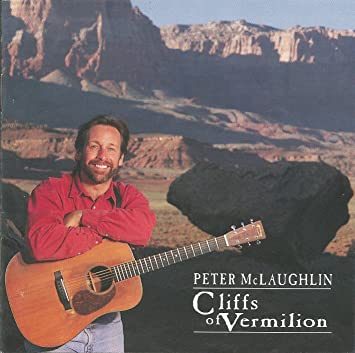 Even though Peter has made his first “solo” recording here, he has kept it all in the family — both literally and figuratively — as not only are members of Grant Street backing him up, the CD was produced by the multi-talented leader of the band, Laurie Lewis, and he does a duet with his brother David and one with his father Bill. So it sounds a lot like a Grant Street recording — Laurie and Tom each even sing lead on a song — with Peter doing most of the lead vocals. While not the most dynamic singer in the band, for a guy who doesn’t get a chance to sing much on stage he sounds pretty good on his own.

There is a good mix of material on Cliffs Of Vermilion, and the production and pickin’ are first rate. Yet such should come as no surprise to fans of Laurie Lewis and Grant Street, who are quite the talented band — Laurie has several recordings of her own, bassman Todd Phillips recently won a Grammy for his Bill Monroe Tribute True Life Blues, and mandolin man Tom Rozum is recording his first solo project right now. But if you’ve ever wondered what that quiet guitar player in the band would sound like on his own, take a trip to the Cliffs Of Vermilion.

David McCarty, Acoustic Guitar
McLaughlin’s credentials include winning the National Flatpicking Guitar Championships and playing with Laurie Lewis and Grant Street since 1991, but his flatpicking prowess hasn’t yet received much attention. That should change with this record, a strong solo effort produced by Lewis with contributions from Mike Marshall, Darol Anger, Tom Rozum, McLaughlin’s brother David, and other top players. McLaughlin’s flatpicking is tasteful, clean, and melodic, and the disc includes a great version of “Cotton Patch Rag.” McLaughlin is also a talented composer; his instrumentals “Augusta Ridge” and “Picking Peppers” could easily become campfire standards. (Dog-Boy, PO Box 57233, Tucson, AZ 85732)