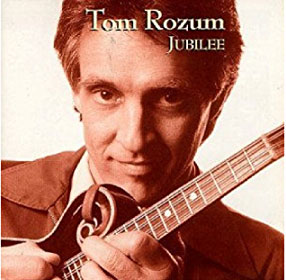 Stepping out as a bandleader for the first time, Tom Rozum has produced one of the better surprises of the year with Jubilee. Although best-known for his mandolin and guitar work with Laurie Lewis & Grant Street, here his talent shines with an all-star supporting cast and a tasteful collection of songs and styles. Leading off with a smooth bluegrass take on Don Helms’ (Hank Williams’ steel player) “Don’t Fix Up the Doghouse” and following with a decidedly offbeat version of Merle Haggard’s “One Sweet Hello” that recalls Uncle Walt’s Band at its most tropical, Rozum sets up the listener for just about anything and then gladly follows through. Aided by Lewis, Herb Pedersen, Darol Anger, Mike Marshall and a host of today’s top pickers, he chooses rather obscure material from the likes of the Louvin Brothers (“Love Is a Lonely Street”), Bill Monroe (“On the Old Kentucky Shore”), Ralph Stanley (“Sweet Sally Brown”), Irving Berlin (“Without My Walking Stick”) and David Olney (“Walk Downtown”), giving each his own spin, yet with an understated amount of polish and just a hint of good humor. (Jim Caligiuri)

Acoustic musicians with a bluegrass bent have formed a strong community of talented players over the last twenty years in particular, and they help each other out when it comes time to go into the recording studio. Tom Rozum is part of that community, so his Jubilee is filled with talented players, most of whom also having solo recordings to their credit. Herb Pedersen, Mike Marshall, Darol Anger, Laurie Lewis, Todd Phillips, Rob Ickes, David Grier – all of these players deliver quality work and their playing on Jubilee is up to their own high standards on every cut. Take as a given that this recording contains some of the highest quality acoustic music you can set your money down for. It’s clean, it’s sharp, often subtle, and as fluid as playing gets. That will let us focus on Tom Rozum as a leader of that group of musicians.

The first thing Rozum gives them is a good range of material. A couple of the songs have the bluegrass feeling to them one might expect these players would enjoy – tunes by Ralph Stanley and Bill Monroe, which would be standard fare for them. From there Rozum moves to a pure strain of country with songs like “Love is a Lonely Street” which the Louvin Brothers covered and which has that kind of pleasant melodic run they popularized. In the same vein are the Hank WIlliams, sr-ish “Don’t Fix Up the Doghouse”; the Lefty Frizzell tune “Treasures Untold”; and Merle Haggard’s “One Sweet Hello.” Tom Rozum doesn’t just present these as straight covers, playing instead with the pacings and textures and giving them fresh readings which in turn spark the players to try something a little different as well. The result is a fresh energy which comes off in a nicely understated way. … …From country Rozum moves logically into swing, allowing even there a range from the vamp of Irving Berlin’s “Without My Walking Stick” to the classic western swing of “Ramblin’ Blues.” Not a songwriter himself (at least here), Rozum knows how to pick songs from past and present with good solid appeal to them.

Tom Rozum’s voice is smooth, and in the end it is what separates his work from the solo works of all those other fine players. Rozum is an excellent mandolinist (and guitarist as well, although he only plays guitar here a couple of times), but his real distinction is as a vocalist. He works the higher end of the spectrum with a pleasing, friendly smoothness that bypasses the twang of bluegrass. He also uses Laurie Lewis as a harmony and duet singer frequently; their voices mesh nicely. When all the pieces assemble over the dozen songs, the result is a comfortably professional offering of acoustic music. Rozum billed this as a Jubilee, partly to honor his parents’ 50th wedding anniversary, and he convinced everyone on this to play with that jubilee sense of fun. They didn’t check their professionalism at the door, but they did allow themselves to be spontaneous while still being spotless. If Tom Rozum’s parents were the inspiration for this recording, they must be two very enjoyable people.

The sessions feature most of the heavy hitters from the California bluegrass scene, including Lewis, Darol Anger, Mike Marshall, Todd Phillips, and Herb Pedersen, and the sound veers from traditional bluegrass to country swing to old time, depending on the material. Highlights include the sad, delicate title tune, the almost vaudeville sound imparted to Irving Berlin’s “My Walking Stick,” and the hopped up Western swing of “Ramblin’ Blues.” Rozum is also a talented graphic artist, and the progressively retro CD insert is almost as much fun to read as the music is to hear. (MP)

It’s that Laurie Lewis/ Tom Rozum duo again, with help from hot-stuff helpers like Herb Pedersen, Todd Phillips, Mike Marshall, Rob Ickes, and others of similar caliber. But this time it’s Tom who called most of the shots and takes the lead. His unique view on those glory years when bluegrass bands and old-time stringbands and early country performers all got up on the same stage provides the variety that’s lacking when modern performers get too focused on one style. The result is great listening, and the wonderful humor in the artwork on the liner notes alone is worth the price. (Richard Johnston)

Probably best known in traditional music circles as Laurie Lewis’ musical partner for the past 12 years in the Grant Street band, as well as on the Grammy-nominated The Oak and the Laurel duet CD, Tom Rozum certainly holds his own on his solo debut. The New England native possesses an earnest tenor voice in the vein of contemporary bluegrass great Tim O’Brien, and peels off rhythmically crisp licks on acoustic and electric mandolin and guitar. The repertoire varies from bluegrass and country to old-time fiddle tunes and late ’40s western swing. The heartfelt harmonizing he, Lewis, and Sylvia Herold negotiate on the Louvin Brothers’ “Love is a Lonely Street” provides enough soul to anchor the entire album. (Derk Richardson)

For Laurie Lewis fans who always wanted to hear a bit more from her talented sidekick, or for anyone who appreciates good mandolin work in a wide range of styles, this album is a real gem. (E. Burkett)

Perhaps best known for his long musical association with bluegrass diva Laurie Lewis, Tom Rozum has been a a big part of some of the best mandolin-oriented acoustic music and bluegrass made over the last 10 years. A quintessential stylist who creates mandolin breaks with the same passion and precision Monet put into his brush strokes, Tom Rozum ought to be recognized as a mandolinist of the first order. The release of Jubilee, his first solo CD, surely will go a long, long way to making more people aware of his formidable skills both as a mandolin player and a great singer, as well as a creative arranger.

Over the 12 tunes here, Rozum glides effortlessly from old-time country on tunes like “Don’t Fix Up The Doghouse” and “Jubilee” to swing tunes such as “Walk Downtown” and “Ramblin’ Blues” to straight-from-the-still bluegrass on “Sweet Sally Brown.” Always a master at placing just the right instrument in just the right musical place, Rozum manages to blend his brilliant mandolin in without ever making it seem like he’s showing off or playing a break because it’s his record. But when it is his turn, such as on “Sweet Sally”, he invariably nails a perfectly composed bluegrass solo that sounds utterly fresh and contemporary while perfectly fitting the tune’s traditional vibe.

With such illuminaries as David Grier, Craig Smith, Todd Phillips, Laurie Lewis, Rob Ickes, Mike Marshall, Peter McLaughlin, Bobby Hicks and the late, lamented Charles Sawtelle on hand, Jubilee positively resonates with thoughtful, creative and impassioned playing and singing. Special note needs to be paid to Rozum’s wonderfully zany sense of humor, reflected in the hilarious fake ads in his CD booklet for “The Original Carter Family Action Figures (Collect them all!)” and in his great Elvis impersonation in “Walk Downtown”. Bravo, Tom! Jubilee is, quite simply, one of may favorite CDs in years. Rozum’s mandolin playing never loses its way or strays from authenticity, and his singing, arranging and sense of musical vision should be a beacon to anyone who loves bluegrass and acoustic music. (Signature Sounds) -David McCarty

Tom Rozum’s regular gig is with fiddler/songwriter extraordinaire Laurie Lewis. Together they form one of the best vocal duos in modern bluegrass. This “solo” album is anything but a solitary pursuit. Tom is joined by David Grier, Mike Marshall, Mary Gibbons, Peter McLaughlin, and the late Charles Sawtelle on guitars; Darol Anger, Bobby Hicks, and Laurie Lewis handle fiddle; Herb Pedersen, and Craig Smithpick banjo, Todd Phillips thumps bass, and Rob Ickes slides around the Dobro, and Tom takes all the mandolin parts. Material comes from a wide range of sources including Merle Haggard, Bill Monroe, David Olney, Pee Wee King, and Irving Berlin. The music goes from bluegrass, to old time country, to western swing, to country blues, and back.

What makes this album special is Tom’s musical intelligence coupled with his pervasive wit. The result is songs that work. The opening cut, “Don’t Fix Up the Doghouse” is a western-swing number written by Don Helms, Hank Williams’ steel guitar player. Traditional bluegrass instruments make it swing without getting too slick. My favorite song on the album is “Without My Walkin’ Stick”. It’s a Irving Berlin tin-pan alley number performed in a funky back alley style that jumps, jives, and shimmys. If you are even slightly into bluegrass or traditional American music Jubilee has to have a place very near your CD player, ’cause it’s gonna get heavy playing time. (Steven Stone)

Tom Rozum, fine mandolin player and most accomplished lead, and harmony vocalist with Laurie Lewis since 1986, when he became an original member of the Grant Street Band. Apart from a duet recording he made with Lewis, The Oak and the Laurel on Rounder, it’s hard to believe that Jubilee is his first solo work. But, nevertheless it’s been worth the wait, and what a wide spectrum of quality fare he covers too.

Ranging from songs popularised by Lefty Frizzell, The Louvin Brothers and Hank Williams to the music of Irving Berlin (“Without My Walking Stick”) to Merle Haggard’s “One Sweet Hello”. Rob Icke’s dobro and Laurie Lewis’ sweet harmonies being of the kind to die for, and there’s the vintage bluegrass of Bill Monroe and Ralph Stanley (“On the Old Kentucky Shore” and “Sweet Sally Brown” respectively capturing the thrill of a tradition that he’s so faithful to). And that’s just for starters, as Lewis and Darol Anger’s fiddles, Todd Phillips’ acoustic bass, Craig Smith’s (and Herb Pederson’s) banjo, Mary Gibbon’s guitar and more besides get into the act.

Rozum’s culture, all-around musicianship, his fine lead vocals, and guile as a harmony foil being something else.

Going back to the above, in text order there’s deft instrumental, “Treasures Untold”, done as a duo with Ickes and himself on guitar, “Love Is a Lonely Street” wafting a warm, mellow feel with relaxed three-part harmonies being a contrast to the toe-taping, swing-like western imbued, “Don’t Fix Up the Doghouse” (oh, boy, what pickin’ there is too on this one. David Grier on guitar being the star). Yet, there’s so much to savour on this album, not least being a version of David Olney’s “Walk Downtown”, while Mark Simos title track, “Jubilee” offers a beauty of the sublime. It’s southern feel reminiscent of something once done by banjoist vocalist Jimmy Arnold. PPPPP (5 stars) -Maurice Hope