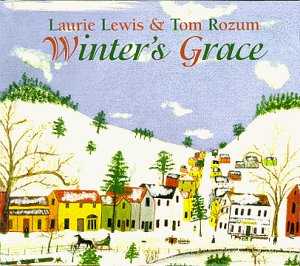 “Laurie Lewis and Tom Rozum celebrate not just the Christmas holiday, but the entire winter solstice season… they explore winter’s beauty, joys and hardships. Winter’s Grace is one of the few seasonal recordings worth hunting down.”
– Derk Richardson

“Good music for the holidays can be hard to come by. So when a gem like this comes by, grab it!”
– Old Time Herald

We have made it through December. The tree has been recycled, the ornaments stashed away in the attic, and chestnuts have been reduced to ashes over the open fire. In many ways it is great to get beyond the hustle of the holiday experience, yet there is something magical about the season and some of the music that is only heard around Christmas time. And if you just want to hold on to that magic for a little longer on these cold frosty mornings one sure way to do so is to listen to Winter’s Grace, the wonderful winter solstice recording by Laurie Lewis and Tom Rozum.

Normally Laurie and Tom play bluegrass with their Bluegrass Pals, but on this recording they’ve gathered some interesting non-bluegrass material and got lots of friends to play along. The song selection is exquisite, and fortunately there are no frosty snowmen, no white-bearded geezers in red outfits, and no grandmas getting run over by wayward reindeer.

The first song is The Messenger, a beautiful tale of winter written by songwriter Mark Simos and sung by Laurie, that features an old-time fiddle sound accompanied by mandola, cello, and bass. Snowy Road is a pretty instrumental written by erstwhile New Englander and resident mandolinist Tom Rozum, and Laurie and Kaila Flexer play twin fiddles. Next comes Tom’s take on the Merle Haggard classic If We Make It Through December, a song that Tom has been singing for years during the holiday season.

Earth Moves In A Mysterious Way features just a fiddle, Nina Gerber’s guitar, Laurie’s voice, and lovely four-part harmony on the chorus. The Wassail Song is a traditional tune from the British Isles that Tom sings, followed by The Gift, which is a musical version of the Mexican folk tale The First Nightingale, with a delightful harp plucked by Barbara Higbie. Christmas Time’s A-Comin’ was written by Bill Monroe’s fiddler Tex Logan, and it is the only song on the CD played by Laurie and Her Bluegrass Pals.

Tom sweetly sings Hot Buttered Rum, the tune by Tommy Thompson of The Red Clay Ramblers, and it is followed by Heiligste Nacht, a German traditional song that is an instrumental played on two mandolins. Wintergrace is a song written by Jean Ritchie, and it has a haunting feel with just two voices, fiddle, and mandola. It is also where the CD title comes from. Cold Frosty Morning is a traditional instrumental song that tastefully closes out the recording.

But make sure you listen all the way to the very end for a surprise banjo piece. With the holidays seeming like centuries ago, the rainy season upon us, and the local football teams watching the playoffs on TV, there is not much joy to this world in January. But if you want to experience tidings of comfort and joy for a little while longer, then sample a little Winter’s Grace. It will help you gracefully make it through January, February, and the rest of winter.

Featuring Laurie’s wonderfully strong and expressive voice and an appropriately simple, tasteful backing. The songs are well chosen, with the initial track–The Messenger writen by Mark Simos- a lovely, haunting peice that alone is worth the price of the album. Other especially effective cuts are EARTH MOVES IN A MYSTERIOUS WAY, CHRISTMAS TIME’S A COMING, IF WE MAKE IT THROUGH DECEMBER, and instrumental treatments of THE SNOWY ROAD and COLD FROSTY MORNING.The accompaniment makes good use of fiddle, cello, mandolin, guitar & Bass. Very attractively packaged, this one is HIGHLY RECOMMENDED. (Note after playing the album’s 11 tracks hang on for an extra “hidden” SLEIGH RIDE, played as banjo solo).