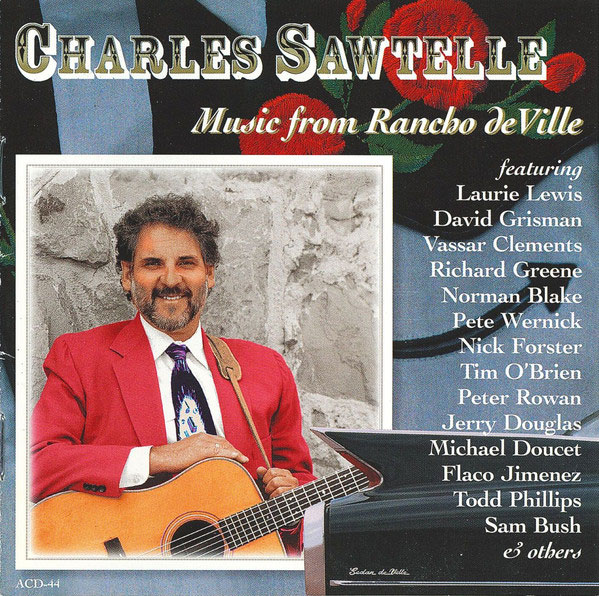 Music from Rancho deVille… (Acoustic Disc)
This posthumously released CD was partially completed when Charles died of leukemia in 1999. His best friend, Laurie Lewis, finished up the project and brought along many of the top names in bluegrass and old-time music, including David Grisman, Jerry Douglas, Norman Blake, Michael Doucet and Flaco Jimenez. And they honor their fallen comrade with inspired performances on, not just bluegrass but old-time, Cajun, even Tex-Mex music. More than an artifact of his interests, this CD shows Sawtelle to be a true and vital contemporary acoustic music artist who, with great respect for tradition, created adventurous, thoroughly enjoyable music. I was touched by the affectionate comments in the liner notes by his peers about Charles as a person and about his dedication and integrity as a musician. And it shows. This is just a damn fine CD. Released Feb. ’01. Reviewed by Kevin Russell.

CHICAGO TRIBUNE DECEMBER 9, 2001
SUNDAY ARTS & ENTERTAINMENT YEAR’S BEST By David Royko
CHARLES SAWTELLE: Music from Rancho deVille (Acoustic Disc). Charles Sawtelle, best known for his work with Hot Rize, died of leukemia in 1999, but not before completing most of this album even as he battled through the final years of his illness. Though a few gaps were later filled in by his musical friends, the disc feels like a finished project, not a collection of scraps, and encompasses Sawtelle’s wide range of tastes, from bluegrass through Tex-Mex, blues, old-time, and Cajun. The roster is impressive and reads like an acoustic who’s who with the likes of David Grisman, Pete Wernick, Flaco Jimenez, Todd Phillips, Tim and Mollie O’Brien, Norman Blake, Michael Doucet, Sam Bush, Jerry Douglas, Peter Rowan, Richard Greene, Vassar Clements, and Darol Anger. “Angel Band,” which closes the disc on a serene and hymn-like note, features a chorus of close friends and colleagues, providing a fitting memorial to a big musical personality.

All the proceeds from this upcoming Acoustic Disc release (Feb. 27) will go to The Bluegrass Trust, a nonprofit fund for musicians in need. It is operated under the aegis of the International Bluegrass Music Association.

Let’s call this music modern American traditional. The powerhouse lineup blurs any attempt at definition, but heart and soul cross any genre, be it newgrass, Cajun, bluegrass or old-time country.

“Rancho deVille” is all of these and more. It is Sawtelle’s long talked about solo project that he labored to finish before his death from leukemia. Sawtelle’s voice and graceful, understated guitar work appear on nearly every track. His vocals on “Aragon Mill” are touching. Blake sings three Carter Family gems that are as “simple” as they are powerful. Doucet brings his fiddle to a bluesy “Jolie Faye.” Jiminez flavors a Norteno version of Woody Guthrie’s “Ranger Command.”

This is a fine tribute to a departed friend and his musical vision. It also helps a worthy cause. For information, call (800) 221-DISC, or see Acoustic Disc on the Web.

Vintage Guitar Magazine: Charles Sawtelle
Music from Rancho DeVille is a love-letter from across the grave. Charles Sawtelle passed away Mach 21, 1999, of complications from leukemia. The last several years of his life were spent recuperating from chemotherapy treatments and making recordings in his home studio, a small stone outbuilding called Rancho DeVille. He entrusted Laurie Lewis with the daunting task of collecting all his masters and forming them into an album. She has produced a CD that is worthy of his memory.

Charles Sawtelle was the kind of guy who did so many things well that his business card, which read “Expert”, wasn’t hyperbole. This CD reveals the breadth of his talents. Cajun tunes like “The Newz Reel” with Micheal Doucet of Beausoleais, old-time country “The Storms Are on The Ocean” by A.P. Carter with Norman Blake on vocals, a Norteno version of Woody Guthrie’s “The Ranger’s Command” where he’s joined by Flaco Jimenez, and Lefty Frizell’s “Mom and Dad’s Waltz” with an unlikely, but perfect vocal, by Vassar Clements are just a few of the musical treats on Music From Rancho DeVille. Charles’ solos often forayed into uncharted musical territory, and this CD has a couple that rival his best. “Let’s Go Home” gives you a taste of his unique instrumental voice.

The biggest musical surprises here are Charles’ own original compositions. Four instrumentals with the likes of David Grisman and Sam Bush on mandolins, Vassar Clements playing fiddle, Jerry Douglas on resophonic guitar, Todd Phillips on string bass, and of course Charles on his herringbone Martin D-28 are simply stunning in their rare beauty. What makes them so remarkable is that they are unpredictable yet classic at the same time.

Charles was a serious audiophile, and his studio was stocked with great old microphones to couple with his superlative Grace eight-channel microphone preamp. If you want to hear what a vintage pre-war Martin herringbone or a Lloyd Loar F-5 mandolin really sounds like in the hands of a master, you have to have this CD. Acoustic disc include their usual special touches that makes their packaging special. Many of Charles’ close associates as well as musicians on the album gives us insight into why Charles was special.

While it’s only mid-February, I have no doubt that this is one of the best releases of 2001. As Charles would say “You need this CD.”

Shaping a legend
CD finally captures late Boulder player Sawtelle’s range
By John Lehndorff, Rocky Mountain News Staff Writer
In late 1994, Boulder guitarist and record producer Charles Sawtelle called his old friend Laurie Lewis, a fiddler and singer. “He asked me if I would produce his solo album. I was very flattered,” Lewis says, calling from her home in Berkeley, Calif. The CD had taken on special importance because Sawtelle, best-known as a member of Colorado’s Grammy-nominated bluegrass band Hot Rize, had been diagnosed with leukemia a few months earlier. That conversation began a recording odyssey that was left incomplete when Sawtelle died at the age of 52 in 1999. “I knew as soon as Charles died I had to complete it,” Lewis says. With help from his family of musical friends, including David Grisman, Michael Doucet and Peter Rowan, the fruit of her work has been realized in Sawtelle’s newly released CD, Music From Rancho deVille. The 16-song collection ranges in style from Cajun to bluegrass and celebrates the life of one of Colorado’s most distinctive musicians.

The album is named after Rancho deVille, the rough-hewn studio Sawtelle crafted out of an old stone building next to his home on a windswept vista near the foothills north of Boulder. “He named it Rancho deVille because he lived in a ranch house and he drove a ’58 Cadillac Coupe deVille,” Nick Forster says. Now producer of the Boulder-based E-Town radio program, Forster met Sawtelle in 1975 when both worked at the Denver Folklore Center.

That folk-music institution had also brought Sawtelle and Lewis together. Lewis was in Denver visiting her sister when they went to the center. Sawtelle, who was the old-guitar expert at the center, was performing there with the local bluegrass band the Rambling Drifters (or the Drifting Ramblers, depending on the day). Seeing her violin case — she was then just an amateur musician — he invited her onstage to play. Producing Music From Rancho deVille proved to be a daunting task for Lewis. “There were so many logistical problems,” she says. “There was never any money, no advance from any record company. And whenever I visited (Boulder), Charles was under the weather (from the illness and the treatments).” Sawtelle received a bone-marrow transplant in 1997, and afterward he continued to produce CDs at his studio and play with his Fort Collins-based bluegrass band The Whippets.

When friends and heroes would come to town, Sawtelle would invite them over to play music. As a result, the new CD boasts an all-star cast of some of the best bluegrass, folk and roots music stars performing today. “He ended up with all those people because they knew him and loved him,” Lewis says. Among those who dropped in were Sam Bush, Vassar Clements, Norman Blake and Flaco Jimenez.

Lewis began the task of producing the CD with only a tentative song list she’d discussed with Sawtelle and a wealth of songs in varying degrees of completion. She commuted to Rancho deVille to work her way through a plethora of tapes and fill in the spaces.

“Gonna Paint This Town was one song that I definitely wanted on the album,” she says. “All that had been recorded were the rhythm tracks. Charles never felt well enough to record the lead vocals. Afterward, I asked Peter Rowan to sing and Richard Greene to add fiddle.”

The final cut on the album is the hymn-like Angel Band. “Charles loved the song. He told me, when he was in the hospital for his bone-marrow transplant, the angel of death visited him,” Lewis says. “He said he told the angel he wasn’t ready to go yet.”

A year after Sawtelle’s death, Lewis assembled a dozen or so bluegrass performers, including Forster, Rowan and Pete Wernick, in a Kentucky hotel room to record a chorus for the poignant song. As the CD ends, the sound of bagpipes can be heard in the distance.

Forster says he knows Sawtelle would have been pleased. “Because of the CD, Charles has a much fuller legacy as an artist, a more accurate reflection of him as a creative being. There’s not just bluegrass but ballads, hymns, romantic instrumentals and storytelling,” he says. Sawtelle’s former Hot Rize band mates appear only briefly on the album. “It’s a funny thing, but Charles really did feel that everyone else (in Hot Rize) had gone on to do solo things. He wanted to do something that wasn’t Hot Rize,” Lewis says.

Review: A roots-music celebration
By John Lehndorff, News Staff Writer
If your only experience with the music of the late Charles Sawtelle was at Hot Rize concerts, his posthumous solo CD with songs from Woody Guthrie and Lefty Frizzell will be a revelation. The 16-song album opens with the rollicking instrumental The Butcher’s Dog, featuring the guitarist with Laurie Lewis and Boulder’s Jean Ballhorn on fiddle, David Grisman on mandolin, and Niwot banjoist Pete Wernick. Chez Seychelles and Jolie Faye are high-powered Cajun workouts anchored by the fiddle work of Beausoleil’s Michael Doucet. Sawtelle’s liking for dark folk tunes is represented in Aragon Mill — with harmonies from Denver singer Mollie O’Brien — and A.P. Carter’s Forsaken Love, backed by Grisman, Norman Blake and Lewis.

Stitching the styles together are the impeccable flat-picked licks Sawtelle gleaned from his vintage Martin guitars and his bluegrass-perfect slightly nasal voice.

The liner notes include photos, tributes and recollections from Tim O’Brien, Grisman, Lewis, Nick Forster, Mollie O’Brien, Doucet and the evocative biography Pete Wernick wrote for Sawtelle’s memorial service in Boulder. If you were one of his many Colorado friends and fans, Music From Rancho deVille will remind you why you loved him in the first place. If you have never heard of him, this all-star CD of genuine roots music is a tuneful way to immerse yourself in Sawtelle’s milieu. March 3, 2001